WELCOME to the London Majors' Alumni Association pages on the Majors'  website.

If you have any photographs, newspaper clippings or memories related to London Majors' team history that you are willing to share, please contact Majors' Alumni Chairperson Barry Boughner at:  E-MAIL ~ bougie7ATrogers.com or CELL ~ 519.777.1337.

Imagine baseball is a big part of your life, historic Labatt Park is your home field and the London Majors are your closest friends. Some of your best memories are clubhouse conversations, sweaty summer practices and the joy of victory and the hell of defeat. Your coaches, trainers, fans and teammates are your tribe and fuel your love of the game.

Now imagine the jersey comes off and you put down the bat and glove. What happens then?

The London Majors' Alumni Association was established in the Spring of 2017 to connect players and families from all eras.

Barry Boughner, chair of the Majors' Alumni, says that Labatt Park was once the meeting place for retired Majors when 20 or 30 guys would show up at the park to shoot the breeze and catch up. Too many of these get-togethers took place when they were mourning the loss of a former coach, manager or player.

When former coach and London Sports Hall of Famer Norm Aldridge, #3, died at age 90 on July 15, 2015, Norm's teammates got together to remember him.

That video tape got him thinking about organizing events to celebrate Majors' history and past accomplishments.

Another loss was the catalyst to make it happen. When Stan (Gabby) Anderson, another London Sports Hall of Famer, died at 87 on June 7, 2016, “many former players and ball staff attended” says Aldridge. It was then the “idea of doing something for the living” was born. Aldridge says organizing events at the park and honouring players go hand-in-hand: “When the living are gathered, the dead will also be remembered."

Barry Boughner was the perfect guy to pull it all together. Boughner, called "a force of nature" by retired Free Press sportswriter Morris Dalla Costa, had played for the London Juniors, London Pontiacs, Avcos and Majors on and off between 1966 and 1984.

He remains in touch with many of his former hockey and baseball teammates and had recently organized a reunion at Budweiser Gardens. In 2015, Boughner brought former hockey teammates from all over the USA and Canada for the 50th anniversary of the London Nationals, London's first Junior 'A' hockey club.

Along with Majors' alumni Scott Aldridge, Wayne Fenlon, Dave Byers, Alex McKay, Jon Owen, Arden Eddie and Barry Wells from the Friends of Labatt Park, they got things rolling. With an eye to developing an annual “Alumni Day,” the group's first meeting was at Dave Byers’ house.

Whether attending meetings, setting up clubhouse displays, organizing on-field presentations, posting team photos on the Majors' website, facebook and twitter, hunting for old newspaper clippings at the Central Library, the Majors' Alumni executive continue to generate interest in their Intercounty Baseball League ball club, which dates back to 1925.

What happens after the jerseys come off and the bat and glove are put away? Once you're a London Major, you’re always on the team.

A 68-second YouTube video of a game between the London Majors and the Brantford Red Sox in 1984 (Wayne Fenlon, #9, is catching for London, with Chris Barr on the mound. Gary Dix is batting for Brantford. Bill 'Rims' Squires was the Majors' PA man for Rogers-TV, with statistician Don Plumb his sidekick and colour man): https://www.youtube.com/watch?v=yaj1PhbyjEM

The London Majors' team bus put out to pasture. The bus knew its own way to The Beer Store. PHOTO:  The London Free Press. circa 1988.

Mike 'Killer' Kilkenny, #17, on the mound for the London Majors in 1983 (right). Kilkenny, a former LHP pitcher in Major League Baseball, was London's ace in 1975 when the Majors won the IBL Pennant and the IBL Championship. PHOTO: The London Free Press. Killer's MLB stats: https://www.baseball-reference.com/players/k/kilkemi01.shtml

LEFT TO RIGHT: OF Russ Evon, Pitcher Tommy White and 3B Ken McFadden of the legendary 1948 London Majors, inaugural team inductees into the London Sports Hall of Fame in 2002. The 1948 London Majors won the Senior IBL Championship, the Canadian Baseball Congress Championship and the Can-Am Baseball Congress Championship, the only IBL team to have won the above three titles during the same season. PHOTO:  London Free Press Collection, Western University Archives.

The above Art-Deco gate off Dundas Street (today's Riverside Drive) was constructed in 1937 or 1938 to commemorate the renaming of Tecumseh Park to Labatt Memorial Park, after John Labatt Limited purchased the park and donated it to the Corporation of the City of London, effective January 1, 1937, on the proviso the park remain a public athletic park in perpetuity. Notice the billboard for the London Lords Senior Football Club (middle photo), a now-defunct team which also played its home games for 18 years at Labatt Park. Unfortunately, the above gate was demolished circa 1980, in favour of the gates around the corner at 25 Wilson Avenue. MIDDLE  PHOTO: 1961 (private collection).

"I called Fergie at his home in Blenheim, Ontario to ask him to pitch for the Majors in 1984. It was the only time I'd ever called him and he actually picked up the phone himself," says Arden Eddie.

"There was an agreement with the IBL that Fergie would pitch at least once in each park on the road. And he did. When Fergie played in London he didn’t expect any special treatment and was comfortable just being one of the guys. He really enjoyed his stay with us. It was fun again after the grind of 19 seasons of pro ball. He signed in 1986 but left for the States before the season started."

Notice the old manual scoreboard in the background, which was replaced by an electronic scoreboard in 1989 when the Eastern League's AA London Tigers first called Labatt Park home. PHOTO: Michael Steven.

In 1984, Fergie notched an IBL-leading nine wins and 81 strikeouts for the London Majors. Fergie's #31 Majors' jersey was retired in June 1992 during Fergie Jenkins Night prior to a home game. The 6-foot-5-inch Jenkins is the only Canadian to be inducted into both the Canadian Baseball Hall of Fame (1987) and the Cooperstown Hall of Fame (1991). PHOTO: London Free Press Collection, Western University Archives.  Fergie's MLB stats: https://www.baseball-reference.com/players/j/jenkife01.shtml 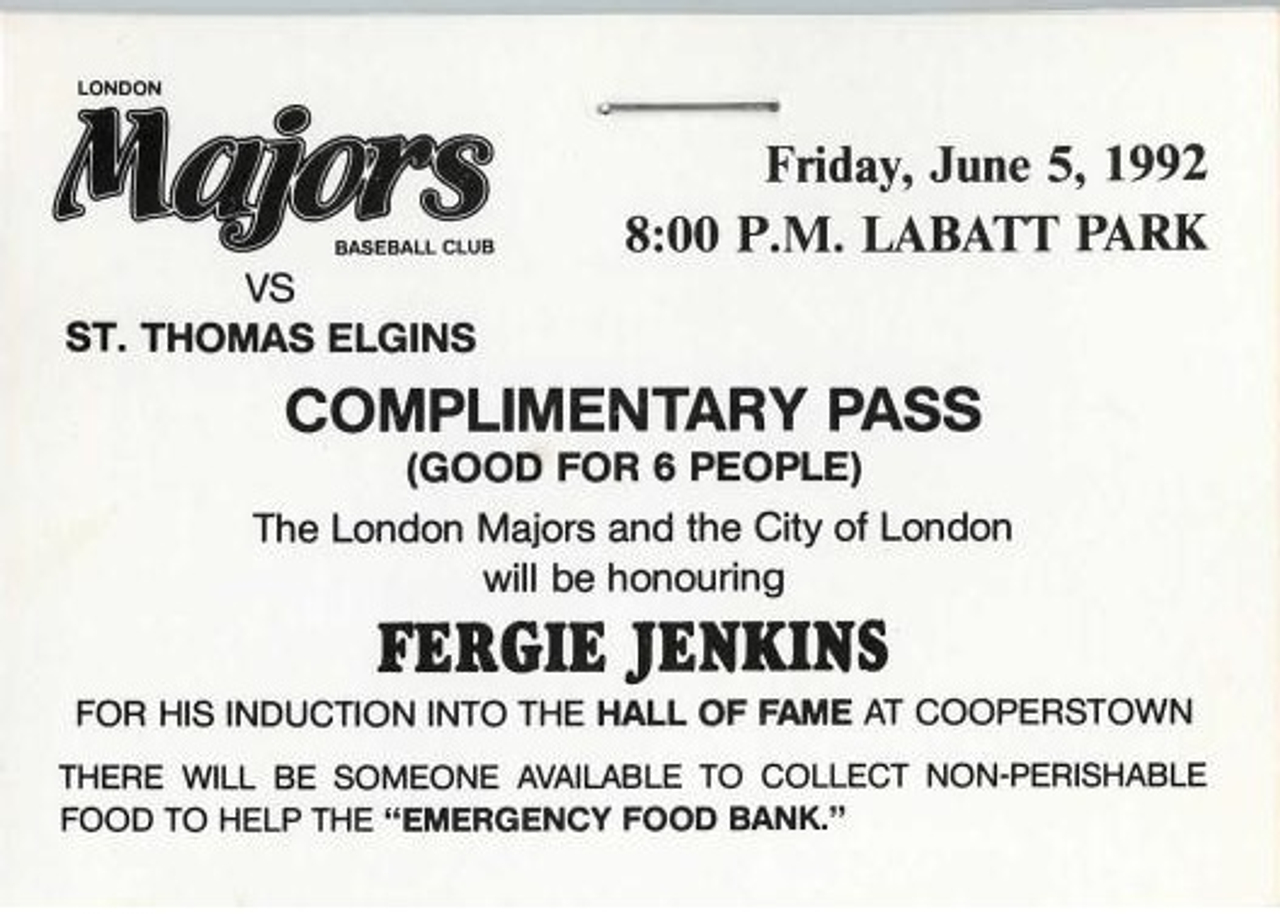 This complimentary pass was stapled to the inside of the 1992 London Majors' Baseball program. IMAGE: Courtesy of Alex McKay.

In fact, it was the last time The Local Nine won the IBL title, although the 1988, 2008 and 2016 Majors won the league pennant, with the 2008 Majors losing the championship series with the Brantford Red Sox in Game 7 before 5,200 fans at historic Labatt Park.

McKay’s outstanding ’75 club was deep in talent and long on camaraderie and teamwork. Two of its five all-stars were league MVP Mike (Killer) Kilkenny and slugger Larry (Haggar) Haggitt.

Killer was a tall, southpaw pitcher fresh from five seasons in The Bigs (Detroit Tigers, Oakland A's, San Diego Padres and Cleveland Indians) who still had all his stuff on the mound. He went undefeated (9-0) during the regular season and 5-2 in the playoffs with an ERA of 1.07. First-baseman Larry Haggitt won the ’75 IBL batting crown with a .412 season average.

According to IBL Iron Man and all-star teammate Arden Eddie, “Killer used to say before games he pitched, ‘Just give me two runs and I’ll take care of the rest.’” Getting a hit off Kilkenny was like trying to steal a pork chop from a pit-bull terrier.

Larry Haggitt, a powerful six-footer built like a brick outhouse, could really crush a baseball. “One night in ’75 during the bottom of the 1st,” says Eddie, “Haggar’s at the plate and he launched one into orbit; a moon shot over the wood fence in right-field and out of the park.”

As the tumblers of time would have it, Larry’s wife, Rachel, who’d gone shopping at White Oaks Mall before the game, was travelling westward over the new Queens Avenue bridge on her way back to watch the game. Just after she arrived at the bridge’s western end, a meteor-like baseball smashed into her front windshield. Or as Arden Eddie describes it, “the ball and the windshield arrived at the same Earth co-ordinates together and the ball and the windshield became one.”

Only after Rachel returned to the park did she discover it was husband Larry who'd dispatched the ball like a cannon out of the park onto Riverside Drive. “It was funny as hell to everyone except Rachel and Haggar,” says Eddie.

What are the odds of clobbering a game ball 540 feet into the windshield of your own moving car? Given that only one man in a million can even hit a baseball 500 feet, the odds of randomly smashing the windshield of your own moving car at that distance are astronomical. It’s the only home-run blast during Haggitt’s career that lightened his wallet at Apple Auto Glass.

Teammate Barry Fuller contends Haggitt “also drilled another one that bounced off the old Dutch Laundry on the other side of Riverside,” an estimated 590 feet from home plate, during another game.

“Haggitt was on fire that year,” says all-star infielder Barry Boughner. “He hit that ball out of the yard in right field onto Riverside Drive and it’s still going.”

Baseball is a magical game of synchronicity, where playful Baseball Gods revel in creating unusual coincidences where split-second timing is everything. The field is the sacred stage, the infield a diamond. There’s nine defensive players and nine innings. Runners move around the bases counter clockwise, but there’s no time clock. Theoretically, a game can last forever. When you think you’ve seen all the strange plays imaginable, another one unfolds before your eyes. As the late Yankee catcher Yogi Berra would say, “It’s déjà vu all over again.”﻿

26. OF Arden Eddie and MGR Roy McKay of the 1969 London Pontiacs celebrating in late September 1969 after the Pontiacs won the Sr. IBL Championship. In the IBL playoffs, the 1969 Pontiacs defeated the Listowel Legionnaires four games to none (4-0) and then in the playoff finals, defeated the Stratford Hoods four games to three (4-3). The 1969 London Pontiacs finished atop the IBL standings during the regular season with a win-loss record of 23-5. PHOTO: London Free Press Collection, Western University Archives.

LEFT TO RIGHT: 1974 London Majors' MGR Roy McKay shakes hands with Denny McLain, who signed a contract to play for the 1974 Majors for $1,000 a game. Two-time (1968-1969) Cy Young Award-winning Detroit Tigers' pitcher Denny McLain played for the London Majors in 1974 after he had retired from Major League Baseball (MLB) in 1972. McLain restricted himself to home games at Labatt Park while staying at the National Traveller Hotel. Due to arm problems, McLain only pitched nine innings for the Majors, but did play in 14 home games at either first base, shortstop or catcher while batting .380, including smacking two home runs in a single game. Onlooking is former Detroit Tigers' catcher Jim Price. PHOTO: Victor Aziz Sr.

Pitcher Ted 'Red' Alexander (September 15, 1912 ~ March 6, 1999) of the 1950 London Majors at Labatt Park on June 28, 1950. Alexander enjoyed a storied pitching career in the Negro American League with the Kansas City Monarchs and the Negro National League with the Homestead Grays , winning the Negro League World Series with the Grays in 1948. Alexander also enjoyed a stint as a barnstorming pitcher with Satchel Paige's All-Stars, before coming north to London, Ontario, in 1950 to pitch for the London Majors. Alexander also pitched the following year for the 1951 London Majors, IBL Champions. PHOTO: Jeanne Graham, London Free Press Collection, Western University Archives.